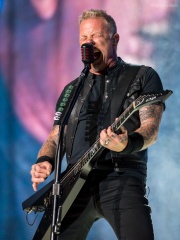 James Alan Hetfield (born August 3, 1963) is an American musician. He is the lead vocalist, rhythm guitarist, co-founder and main songwriter of heavy metal band Metallica. He is mainly known for his intricate rhythm playing, but occasionally performs lead guitar duties and solos, both live and in the studio. Read more on Wikipedia

James Hetfield is most famous for being the lead singer and guitarist for the band Metallica.

Among people born in 1963, James Hetfield ranks 16. Before him are Viktor Orbán, Ronald Koeman, Sergey Bubka, Till Lindemann, Donnie Yen, and Mohammed VI of Morocco. After him are Thomas Anders, Peter Schmeichel, Mikhail Khodorkovsky, Eros Ramazzotti, Rick Rubin, and James May.