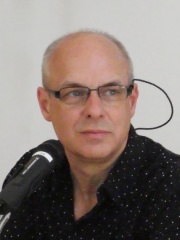 Brian Peter George St John le Baptiste de la Salle Eno (; born Brian Peter George Eno; 15 May 1948) is an English musician, record producer, visual artist, and theorist best known for his pioneering work in ambient music and contributions to rock, pop and electronica. A self-described "non-musician", Eno has helped introduce unique conceptual approaches and recording techniques to contemporary music. He has been described as one of popular music's most influential and innovative figures.Born in Suffolk, Eno studied painting and experimental music at the art school of Ipswich Civic College in the mid 1960s, and then at Winchester School of Art. Read more on Wikipedia

Brian Eno is most famous for his work in the 1970s with the rock band Roxy Music, and for his solo albums, including Another Green World, Music for Airports, and Discreet Music.