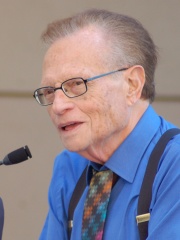 Larry King (born Lawrence Harvey Zeiger; November 19, 1933) is an American television and radio host, whose work has been recognized with awards including two Peabodys, an Emmy award, and 10 Cable ACE Awards. King began as a local Florida journalist and radio interviewer in the 1950s and 1960s and gained prominence beginning in 1978 as host of The Larry King Show, an all-night nationwide call-in radio program heard on the Mutual Broadcasting System.From 1985 to 2010, he hosted the nightly interview television program Larry King Live on CNN. From 2012 until 2020, he hosted Larry King Now on Hulu and RT America. Read more on Wikipedia

Since 2007, the English Wikipedia page of Larry King has received more than 5,670,199 page views. His biography is available in 50 different languages on Wikipedia making him the 8th most popular presenter.