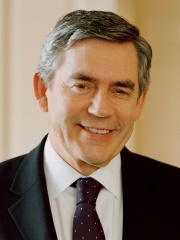 James Gordon Brown (born 20 February 1951) is a British politician who served as Prime Minister of the United Kingdom and Leader of the Labour Party from 2007 to 2010. He served as Chancellor of the Exchequer in the Blair government from 1997 to 2007. Brown was a Member of Parliament (MP) from 1983 to 2015, first for Dunfermline East and later for Kirkcaldy and Cowdenbeath. Read more on Wikipedia

Gordon Brown is most famous for being the Prime Minister of the United Kingdom from 2007 to 2010.

Among politicians, Gordon Brown ranks 2,539 out of 15,710. Before him are Princess Charlotte, Duchess of Valentinois, Auguste Mariette, Charles Ferdinand, Duke of Berry, Fuad Masum, Kitbuqa, and Haakon V of Norway. After him are Seleucus IV Philopator, Empress Suiko, Lütfi Pasha, Karl Theodor, Duke in Bavaria, Christopher II of Denmark, and Alexandre Colonna-Walewski.