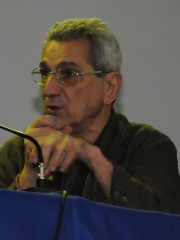 Antonio "Toni" Negri (born 1 August 1933) is an Italian Spinozistic-Marxist sociologist and political philosopher, best known for his co-authorship of Empire and secondarily for his work on Spinoza. Born in Padua, he became a political philosophy professor in his hometown university. Negri founded the Potere Operaio (Worker Power) group in 1969 and was a leading member of Autonomia Operaia. Read more on Wikipedia

Antonio Negri is most famous for his work on the theory of "biopolitics," which he developed with Michael Hardt. Biopolitics is a form of power that operates through the control of life itself, and is exercised by the state, corporations, and other institutions.