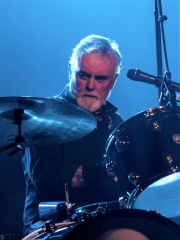 Roger Meddows Taylor (born 26 July 1949) is an English musician, singer and multi-instrumentalist, best known as the drummer for the rock band Queen. As a drummer, Taylor was recognised early in his career for his unique sound. He was voted the eighth-greatest drummer in classic rock music history in a listener poll conducted by Planet Rock in 2005.As a songwriter, Taylor contributed songs to Queen's albums from the beginning, composing at least one track on every album, and often singing lead vocals on his own compositions. Read more on Wikipedia

Roger Taylor is most famous for being a drummer and vocalist for the British rock band Queen.