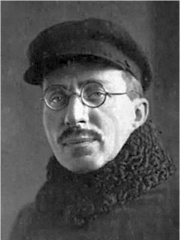 Anton Semenovich Makarenko (Ukrainian: Анто́н Семенович Мака́ренко, 13 January 1888 – 1 April 1939), a Ukrainian and Soviet educator, social worker and writer, became the most influential educational theorist in the Soviet Union; he promoted democratic ideas and principles in educational theory and practice. As one of the founders of Soviet pedagogy, he elaborated the theory and methodology of upbringing in self-governing child collectives and introduced the concept of productive labor into the educational system. Makarenko is often reckoned among the world's great educators, and his books have appeared in many countries.In the aftermath of the Revolution of 1917, he established self-supporting orphanages for street children — including juvenile delinquents — left orphaned by the Russian Civil War of 1917-1923. Read more on Wikipedia

Anton Makarenko is most famous for his work with juvenile delinquents in the Soviet Union. He believed that delinquents needed to be treated as human beings and not as criminals. He created a system that was based on education, rehabilitation, and labor.