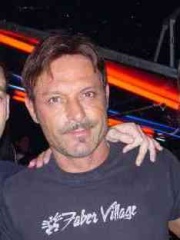 Salvatore Schillaci (Italian pronunciation: [salvaˈtoːre skilˈlaːtʃi]; born 1 December 1964), commonly referred to by his nickname Totò, is an Italian former footballer, who played as a striker. During his club career, he played for Messina (1982–1989), Juventus (1989–1992), Internazionale (1992–1994) and Júbilo Iwata (1994–1997).At the international level he was the surprise star of the 1990 FIFA World Cup, as he helped Italy to a third-place finish on home soil. Coming on as substitute in Italy's first game, Schillaci went on to score six goals throughout the World Cup, claiming the Golden Boot as the leading goalscorer, and received the Golden Ball as player of the tournament ahead of established stars Lothar Matthäus and Diego Maradona, who came second and third respectively. Read more on Wikipedia