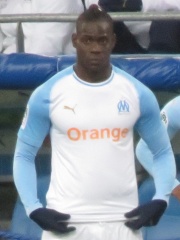 Mario Balotelli Barwuah (Italian pronunciation: [ˈmaːrjo baloˈtɛlli]; born Mario Barwuah; 12 August 1990) is an Italian professional footballer who plays as a striker for Serie A club Brescia and the Italy national team. He started his professional football career at Lumezzane and played for the first team twice before having an unsuccessful trial at Barcelona, and subsequently joining Inter Milan in 2007. Inter manager Roberto Mancini brought Balotelli into the first team, but when Mancini left, Balotelli's disciplinary record fell away. Read more on Wikipedia

Since 2007, the English Wikipedia page of Mario Balotelli has received more than 8,177,455 page views. His biography is available in 73 different languages on Wikipedia making him the 424th most popular soccer player.