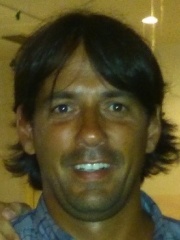 Simone Inzaghi (Italian pronunciation: [siˈmoːne inˈtsaːɡi]; born 5 April 1976) is an Italian professional football manager and former player, currently in charge of Serie A club Lazio. The younger brother of Filippo Inzaghi, Simone played as a striker for a host of clubs during his professional career, including Piacenza and Lazio; he remained for more than a decade at the Roman club, winning major honours including the Double, but also spending time on the bench and being sent on loan spells. Read more on Wikipedia

Since 2007, the English Wikipedia page of Simone Inzaghi has received more than 916,048 page views. His biography is available in 27 different languages on Wikipedia making him the 1,295th most popular soccer player.