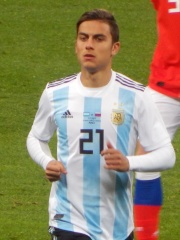 Paulo Exequiel Dybala (born 15 November 1993) is an Argentine professional footballer who plays as a forward for Serie A club Juventus and the Argentina national team. Commonly referred to as "La Joya" ("The Jewel"), Dybala began his club career in 2011 with Instituto de Córdoba; he joined Palermo in 2012, at age 18, in a transfer worth a reported €8 million, where he established himself as one of the world's best young players and won a Serie B title. In 2015, Dybala signed for Juventus for an initial €32 million fee, and has won five league titles, four Coppas Italia, was voted in the Serie A Team of the Year four times, and won Serie A Most Valuable Player in 2020. Read more on Wikipedia