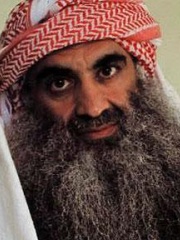 Khalid Sheikh Mohammed (sometimes also spelled Khalid Shaikh Mohammed; among at least fifty pseudonyms; born March 1, 1964; or April 14, 1965) is a Pakistani terrorist held by the United States at the Guantanamo Bay detention camp under terrorism-related charges. He was named as "the principal architect of the 9/11 attacks" in the 9/11 Commission Report.Sheikh Mohammed was a member of Osama bin Laden's al-Qaeda organization, leading al-Qaeda's propaganda operations from around 1999 until late 2001. He confessed to FBI agents to a role in many of the most significant terrorist plots over the last twenty years, but his interrogators' use of torture has caused many to question certain aspects of his confessions.Mohammed was captured on March 1, 2003, in the Pakistani city of Rawalpindi by a combined operation of the US Central Intelligence Agency (CIA) and Pakistan's Inter-Services Intelligence (ISI). Immediately after his capture, Mohammad was extraordinarily rendered to secret CIA prison sites in Afghanistan, then Poland, where he was interrogated by U.S. Read more on Wikipedia

Since 2007, the English Wikipedia page of Khalid Sheikh Mohammed has received more than 2,751,909 page views. His biography is available in 30 different languages on Wikipedia making him the 128th most popular extremist.

Among EXTREMISTS In Pakistan