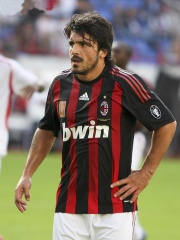 Gennaro Ivan "Rino" Gattuso (Italian pronunciation: [dʒenˈnaːro ɡatˈtuːzo]; born 9 January 1978) is a retired Italian footballer who is the current manager of Napoli. As a player, he mainly played in the centre as a defensive midfielder, although he was also capable of playing on the wing. He initially played for Perugia, Salernitana, and Rangers, though he is mostly remembered for his time with Milan in Serie A, where he won the Champions League, in 2002–03 and 2006–07, the Coppa Italia in 2002–03, and also the Serie A title in 2003–04 and 2010–11. Read more on Wikipedia

Since 2007, the English Wikipedia page of Gennaro Gattuso has received more than 2,315,419 page views. His biography is available in 54 different languages on Wikipedia making him the 428th most popular soccer player.