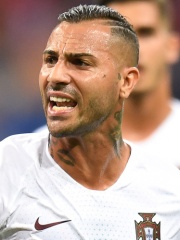 Ricardo Andrade Quaresma Bernardo (European Portuguese: [ʁiˈkaɾðu kwɐˈɾɛʒmɐ]; born 26 September 1983) is a Portuguese professional footballer who plays as a winger for Vitória de Guimarães and the Portugal national team. He started out at Sporting and also played for Barcelona, Inter Milan, Chelsea, Beşiktaş, Al-Ahli Dubai and Kasımpaşa, but he arguably spent the best years of his career at Porto after signing in 2004. Read more on Wikipedia

Since 2007, the English Wikipedia page of Ricardo Quaresma has received more than 3,230,298 page views. His biography is available in 56 different languages on Wikipedia making him the 558th most popular soccer player.