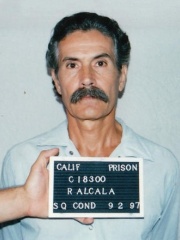 Rodney James Alcala (born Rodrigo Jacques Alcala Buquor; August 23, 1943 – July 24, 2021), dubbed the Dating Game Killer, was an American serial killer and sex offender who was sentenced to death in California for five murders committed in the state between 1977 and 1979, and received an additional sentence of 25 years to life after pleading guilty to two homicides committed in New York in 1971 and 1977. While he has been conclusively linked to eight murders, Alcala's true number of victims remains unknown and could be much higher – authorities believe the actual number is as high as 130.Alcala compiled a collection of more than 1,000 photographs of women, teenage girls, and boys, many in sexually explicit poses. In 2016, he was charged with the 1977 murder of a woman identified in one of his photos. Read more on Wikipedia