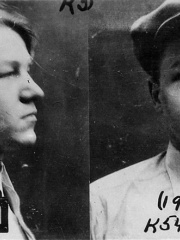 Lester Joseph Gillis (December 6, 1908 – November 27, 1934), known by the alias George Nelson and Baby Face Nelson, was an American bank robber. He became partners with John Dillinger, helping him escape from prison in Crown Point, Indiana. Nelson and the remaining gang members were labeled as public enemy number one. Read more on Wikipedia

Since 2007, the English Wikipedia page of Baby Face Nelson has received more than 3,025,540 page views. His biography is available in 15 different languages on Wikipedia making him the 102nd most popular extremist.