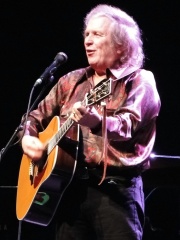 Donald McLean III (born October 2, 1945) is an American singer-songwriter, best known for his 1971 hit song "American Pie", an 8.5-minute folk rock "cultural touchstone" about the loss of innocence of the early rock and roll generation.His other hit singles include "Vincent", "Dreidel", a rendition of Roy Orbison's "Crying", a rendition of the Skyliners' "Since I Don't Have You", and "Wonderful Baby". His composition "And I Love You So" has been sung by Elvis Presley, Perry Como, Helen Reddy, Glen Campbell, and others, and in 2000, Madonna had a hit with a rendition of "American Pie". In 2004, he was inducted into the Songwriters Hall of Fame. Read more on Wikipedia

Since 2007, the English Wikipedia page of Don McLean has received more than 2,568,201 page views. His biography is available in 31 different languages on Wikipedia making him the 463rd most popular singer.