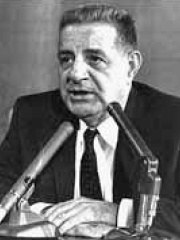 Joseph Michael Valachi (September 22, 1904 – April 3, 1971) was an American gangster in the Genovese crime family who is notable as the first member of the Italian-American Mafia to, in 1963, acknowledge its existence publicly. He is credited with popularization of the term cosa nostra.Valachi was convicted of drug trafficking in 1959, and sentenced to 15 years' imprisonment. In 1962 while he and Genovese family boss Vito Genovese were in prison together, he murdered an inmate he thought was a hitman sent by Genovese, and was sentenced to life imprisonment. Valachi subsequently became a government witness, and the next year testified before a U.S. Read more on Wikipedia

Since 2007, the English Wikipedia page of Joseph Valachi has received more than 696,564 page views. His biography is available in 15 different languages on Wikipedia making him the 108th most popular extremist.