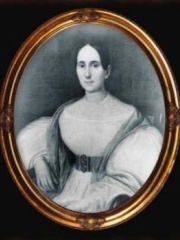 Marie Delphine Macarty or MacCarthy (March 19, 1787 – December 7, 1849), more commonly known as Madame Blanque or, after her third marriage, as Madame LaLaurie, was a New Orleans Creole socialite and serial killer who tortured and murdered slaves in her household. Born during the Spanish colonial period, LaLaurie married three times in Louisiana and was twice widowed. She maintained her position in New Orleans society until April 10, 1834, when rescuers responded to a fire at her Royal Street mansion. Read more on Wikipedia

Since 2007, the English Wikipedia page of Delphine LaLaurie has received more than 3,523,626 page views. Her biography is available in 17 different languages on Wikipedia making her the 86th most popular extremist.