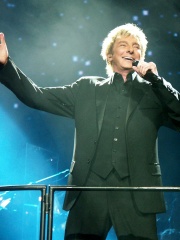 Barry Manilow (born Barry Alan Pincus, June 17, 1943) is an American singer-songwriter, arranger, musician, producer and actor, with a career that has spanned more than 50 years. His hit recordings include "Could It Be Magic", "Mandy", "I Write the Songs", "Can't Smile Without You" and "Copacabana (At the Copa)". He recorded and released 51 Top 40 singles on the Adult Contemporary Chart, including 13 that hit number one, 28 appeared within the top ten, and 36 in the top twenty. Read more on Wikipedia

Since 2007, the English Wikipedia page of Barry Manilow has received more than 4,313,318 page views. His biography is available in 35 different languages on Wikipedia making him the 375th most popular singer.