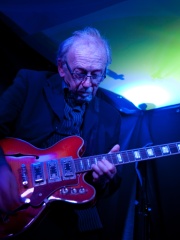 Richard Clifford Taylor (born 28 January 1943) is an English musician, best known as the guitarist and founding member of the Pretty Things. Taylor was an early bassist for the Rolling Stones, but left the band to resume his studies at Sidcup Art College. While there he formed the Pretty Things in September 1963. Read more on Wikipedia

Among musicians, Dick Taylor ranks 633 out of 2,675. Before him are Link Wray, Julian Fontana, Tim Buckley, Hermeto Pascoal, Charlie Christian, and Bob Sinclar. After him are İdil Biret, Claude Bolling, David A. Stewart, Vagif Mustafazadeh, Chucho Valdés, and Matthias Jabs.