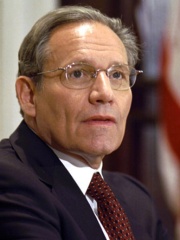 Robert Upshur Woodward (born March 26, 1943) is an American investigative journalist. He started working for The Washington Post as a reporter in 1971 and currently holds the title of associate editor.While a young reporter for The Washington Post in 1972, Woodward teamed up with Carl Bernstein; the two did much of the original news reporting on the Watergate scandal. These scandals led to numerous government investigations and the eventual resignation of President Richard Nixon. Read more on Wikipedia

Among writers, Bob Woodward ranks 1,459 out of 5,794. Before him are Eupolis, Ono no Komachi, Aleksandr Kuprin, Jim Thompson, Usama ibn Munqidh, and Jules Laforgue. After him are Ilia Chavchavadze, Jakob Wassermann, Wace, Korney Chukovsky, Kenji Miyazawa, and Agrippa d'Aubigné.