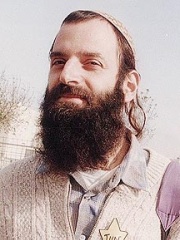 Baruch Kopel Goldstein (Hebrew: ברוך קופל גולדשטיין; born Benjamin Goldstein; December 9, 1956 – February 25, 1994) was an American-Israeli mass murderer, religious extremist, and physician who perpetrated the 1994 Cave of the Patriarchs massacre in Hebron, killing 29 and wounding 125 Palestinian Muslim worshipers. The massacre ended when he was beaten to death.The Israeli government condemned the massacre, and responded by arresting followers of Meir Kahane, criminalizing the Kach movement and affiliated movements as terrorist, forbidding certain Israeli settlers to enter Palestinian towns, and demanding that those settlers turn in their army-issued rifles, although rejecting a Palestinian Liberation Organization demand that all settlers in the West Bank be disarmed and that an international force be created to protect Palestinians.Jewish Israelis were barred from entering major Arab communities in Hebron. The Israeli government also took extreme measures against Palestinians following the deadly riots after the massacre, expelling them from certain streets near Jewish settlements in Hebron, such as Al-Shuhada Street, where many Palestinians had homes and businesses, and allowing access exclusively to Jewish Israelis and foreign tourists.Goldstein's gravesite became a pilgrimage site for Jewish extremists. Read more on Wikipedia