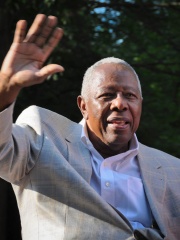 Henry Louis Aaron (February 5, 1934 – January 22, 2021), nicknamed "Hammer" or "Hammerin' Hank", was an American professional baseball right fielder who played 23 seasons in Major League Baseball (MLB), from 1954 through 1976. Widely regarded as one of the greatest baseball players in history, he spent 21 seasons with the Milwaukee/Atlanta Braves in the National League (NL) and two seasons with the Milwaukee Brewers in the American League (AL). His 755 career home runs broke the long-standing MLB record set by Babe Ruth and stood as the most for 33 years; Aaron still holds many other MLB batting records. Read more on Wikipedia