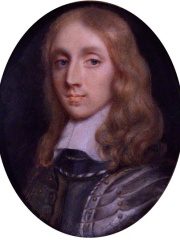 Richard Cromwell (4 October 1626 – 12 July 1712) was an English statesman who was the second and last Lord Protector of the Commonwealth of England, Scotland and Ireland and son of the first Lord Protector, Oliver Cromwell. On his father's death in 1658 Richard became Lord Protector, but lacked authority. He tried to mediate between the army and civil society and allowed a Parliament containing many disaffected Presbyterians and Royalists to sit. Read more on Wikipedia

Among politicians, Richard Cromwell ranks 1,210 out of 15,577. Before him are Emperor Ninkō, Emperor Taizu of Song, Louis Joseph, Dauphin of France, John II Komnenos, Sandra Mason, and Louis III of France. After him are Daoguang Emperor, Maria Christina, Duchess of Teschen, Marie Louise d’Orléans, Emperor Gaozong of Tang, Felix Yusupov, and Emir Abdelkader.