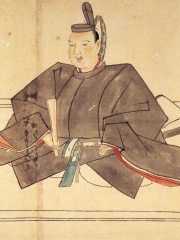 Since 2007, the English Wikipedia page of Tokugawa Ienobu has received more than 72,100 page views. His biography is available in 24 different languages on Wikipedia making him the 6,043rd most popular politician.

Among politicians, Tokugawa Ienobu ranks 6,006 out of 14,801. Before him are Honoré III, Prince of Monaco, Proclus of Constantinople, Rei Kawakubo, Mirian III of Iberia, Samori Ture, and Galeazzo II Visconti. After him are Einar Gerhardsen, Neferkare II, Inca Roca, Archduchess Maria Anna Josepha of Austria, Frederick Michael, Count Palatine of Zweibrücken, and Argaeus I of Macedon.

Among people born in 1662, Tokugawa Ienobu ranks 5. Before him are Mary II of England, Maximilian II Emanuel, Elector of Bavaria, Marie Louise d’Orléans, and Hans-Adam I, Prince of Liechtenstein. After him are Matthäus Daniel Pöppelmann, Balaji Vishwanath, and Richard Bentley. Among people deceased in 1712, Tokugawa Ienobu ranks 10. Before him are Louis, Duke of Burgundy, Marie Adélaïde of Savoy, Louis Joseph, Duke of Vendôme, Hans-Adam I, Prince of Liechtenstein, Nicolas Catinat, and Bahadur Shah I. After him are Jan van der Heyden, Juan Bautista Cabanilles, Nehemiah Grew, Louisa Maria Stuart, and Friedrich Wilhelm Zachow.