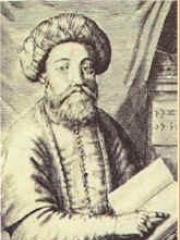 Sabbatai Zevi (Hebrew: שַׁבְּתַי צְבִי; August 1, 1626 – c. September 17, 1676), also spelled Shabbetai Ẓevi, Shabbeṯāy Ṣeḇī, Shabsai Tzvi, Sabbatai Zvi, and Sabetay Sevi in Turkish, was a Jewish mystic and ordained rabbi from Smyrna (now İzmir, Turkey). A kabbalist of Romaniote or Sephardic origin, Zevi, who was active throughout the Ottoman Empire, claimed to be the long-awaited Jewish Messiah. He was the founder of the Sabbatean movement, whose followers subsequently came to be known as Dönme (converts) or crypto-Jews.Upon arriving in Constantinople in February 1666, Sabbatai was imprisoned on the order of the grand vizier Köprülüzade Fazıl Ahmed Pasha; in September of that same year, after being moved from different prisons around the capital to Adrianople, (modern Edirne, the imperial court's then seat) to be judged on accusations of fomenting sedition, Sabbatai was given the choice of either facing death by some type of ordeal, or of converting to Islam by the Grand Vizier representing the Sultan of the Ottoman Empire, Mehmed IV. Read more on Wikipedia

Sabbatai Zevi was most famous for his conversion to Islam in 1666.

Among religious figures, Sabbatai Zevi ranks 328 out of 2,238. Before him are Pope Stephen IV, Pope Adrian V, Pope Callixtus I, Pope Leo IV, Ubba, and Pope Martin I. After him are Pope Nicholas IV, Pope Damasus II, Ephrem the Syrian, James, son of Alphaeus, Barabbas, and Philip Neri.