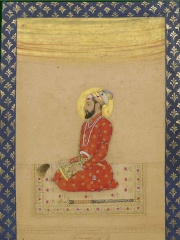 Bahadur Shah (Persian: بہادر شاه اول‎—Bahādur Shāh Awwal) (14 October 1643 – 27 February 1712), also known as Muhammad Mu'azzam (Persian: محمد معظم‎) and Shah Alam (Persian: شاه عالم‎), was the seventh Mughal emperor of India, ruled from 1707 until his death in 1712. In his youth, he conspired to overthrow his father Aurangzeb, the sixth Mughal emperor, and ascend to the throne. Shah's plans were intercepted by the emperor, who imprisoned him several times. Read more on Wikipedia

Since 2007, the English Wikipedia page of Bahadur Shah I has received more than 1,102,202 page views. His biography is available in 39 different languages on Wikipedia making him the 5,439th most popular politician.

Page views of Bahadur Shah IS by language

Among politicians, Bahadur Shah I ranks 5,406 out of 14,801. Before him are Janusz Radziwiłł, James Stewart, 1st Earl of Moray, Xi Zhongxun, Ichirō Hatoyama, Witteric, and Magdalena of France. After him are Ammuna, Aureolus, Princess Alexandrine of Baden, Wanyan Liang, Enomoto Takeaki, and Dragiša Cvetković.