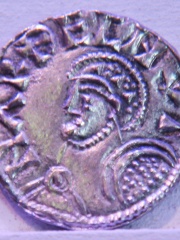 Harthacnut (Danish: Hardeknud; "Tough-knot"; c. 1018 – 8 June 1042), traditionally Hardicanute, sometimes referred to as Canute III, was King of Denmark from 1035 to 1042 and King of the English from 1040 to 1042. Harthacnut was the son of King Cnut the Great (who ruled Denmark, Norway, and England) and Emma of Normandy. When Cnut died in 1035, Harthacnut struggled to retain his father's possessions. Read more on Wikipedia

Harthacnut was most famous for being King of England for a short time and for being the son of the Danish King, Canute.

Page views of Harthacnuts by language

Among politicians, Harthacnut ranks 1,195 out of 15,577. Before him are Samo, Conrad IV of Germany, Emperor Wen of Sui, Mahmoud Ahmadinejad, Valdemar II of Denmark, and Demetrius I of Macedon. After him are Cleopatra II of Egypt, Romanos III Argyros, Suleyman Shah, Karl Haushofer, Francesco I Sforza, and Harold Macmillan.