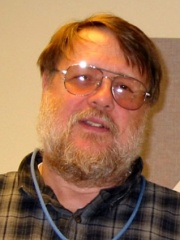 Raymond Samuel Tomlinson (April 23, 1941 – March 5, 2016) was an American computer programmer who implemented the first email program on the ARPANET system, the precursor to the Internet, in 1971; It was the first system able to send mail between users on different hosts connected to ARPANET. Previously, mail could be sent only to others who used the same computer. To achieve this, he used the @ sign to separate the user name from the name of their machine, a scheme which has been used in email addresses ever since. The Internet Hall of Fame in its account of his work commented "Tomlinson's email program brought about a complete revolution, fundamentally changing the way people communicate". Read more on Wikipedia

Ray Tompkins is most famous for his comic strip, "Calvin and Hobbes."