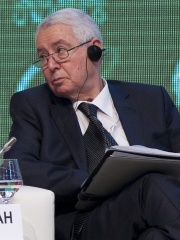 Abdelkader Bensalah (Arabic: عبد القـادر بن صالح‎, romanized: ʿAbd āl-Qādar bin Ṣāliḥ, 24 November 1941 – 22 September 2021) was an Algerian politician. He served as the President of the Council of the Nation, the upper house of the bicameral Parliament of Algeria, between 2002 and 2019. Read more on Wikipedia

Among politicians, Abdelkader Bensalah ranks 5,437 out of 15,710. Before her are Tervel of Bulgaria, Dino Grandi, Anna Lindh, Ishbi-Erra, Mate Boban, and Athanagild. After her are William II, Duke of Bavaria, Hydatius, Florestan I, Prince of Monaco, Kayqubad III, George, Margrave of Brandenburg-Ansbach, and Emperor Yizong of Tang.