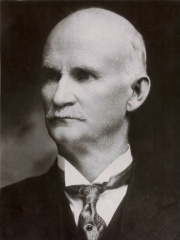 John Moses Browning (January 23, 1855 – November 26, 1926) was an American firearm designer who developed many varieties of military and civilian firearms, cartridges, and gun mechanisms – many of which are still in use around the world. He made his first firearm at age 13 in his father's gun shop and was awarded the first of his 128 firearm patents on October 7, 1879, at the age of 24. He is regarded as one of the most successful firearms designers of the 19th and 20th centuries and pioneered the development of modern repeating, semi-automatic, and automatic firearms.Browning influenced nearly all categories of firearms design, especially the autoloading of ammunition. Read more on Wikipedia

John Browning is most famous for being the inventor of the M1911 pistol, which was the US military's standard sidearm for over 50 years. He also invented the first semi-automatic rifle, the Winchester rifle, and the Browning machine gun.