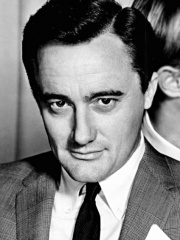 Robert Francis Vaughn (November 22, 1932 – November 11, 2016) was an American actor noted for his stage, film and television work. His television roles include the spy Napoleon Solo in the 1960s series The Man from U.N.C.L.E.; the detective Harry Rule in the 1970s series The Protectors; Morgan Wendell in the 1978–1979 miniseries Centennial; formidable General Hunt Stockwell in the fifth season of the 1980s series The A-Team; and grifter and card sharp Albert Stroller in the British television drama series Hustle (2004–2012), for all but one of its 48 episodes. He also appeared in the British soap opera Coronation Street as Milton Fanshaw from January until February 2012.In film, he portrayed the gunman Lee in The Magnificent Seven, Major Paul Krueger in The Bridge at Remagen, the voice of Proteus IV, the computer villain of Demon Seed, Walter Chalmers in Bullitt, Ross Webster in Superman III, General Woodbridge in The Delta Force, and war veteran Chester A. Read more on Wikipedia

Robert Vaughn is most famous for his role as Napoleon Solo in the TV series The Man from U.N.C.L.E.