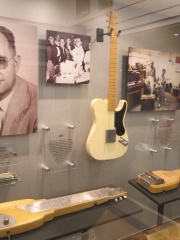 Clarence Leonidas “Leo” Fender (August 10, 1909 – March 21, 1991) was an American inventor, who founded Fender Electric Instrument Manufacturing Company, or "Fender" for short. In January 1965, he sold the company to CBS and later founded two other musical instrument companies, Music Man and G&L Musical Instruments. The guitars, bass guitars, and amplifiers he designed from the 1940s on are still widely used: the Fender Telecaster (1950) was the first mass-produced solid-body electric guitar; the Fender Stratocaster (1954) is among the world's most iconic electric guitars; the Fender Precision Bass (1951) set the standard for electric bass guitars, and the Fender Bassman amplifier, popular enough in its own right, became the basis for later amplifiers (notably by Marshall and Mesa Boogie) that dominated rock and roll music. Read more on Wikipedia

Since 2007, the English Wikipedia page of Leo Fender has received more than 646,549 page views. His biography is available in 35 different languages on Wikipedia making him the 81st most popular inventor.