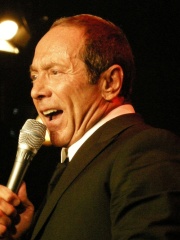 Paul Albert Anka (born July 30, 1941) is a Canadian-American singer, songwriter and actor. Anka became famous with hit songs like "Diana", "Lonely Boy", "Put Your Head on My Shoulder", and "(You're) Having My Baby". He wrote such well-known music as the theme for The Tonight Show Starring Johnny Carson and one of Tom Jones's biggest hits, "She's a Lady". Read more on Wikipedia

Since 2007, the English Wikipedia page of Paul Anka has received more than 4,771,298 page views. His biography is available in 45 different languages on Wikipedia making him the 72nd most popular singer.

Among singers, Paul Anka ranks 72 out of 3,001. Before him are 50 Cent, Stevie Wonder, Miriam Makeba, Anna Magdalena Bach, Jennifer Lopez, and The Notorious B.I.G.. After him are Johnny Hallyday, Shakira, Carlos Gardel, Jon Bon Jovi, Karel Gott, and Kate Bush.