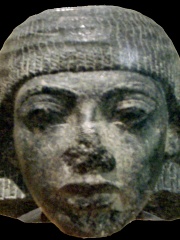 Menpehtyre Ramesses I (or Ramses) was the founding pharaoh of ancient Egypt's 19th Dynasty. The dates for his short reign are not completely known but the time-line of late 1292–1290 BC is frequently cited as well as 1295–1294 BC. Read more on Wikipedia

Since 2007, the English Wikipedia page of Ramesses I has received more than 961,325 page views. His biography is available in 48 different languages on Wikipedia (up from 45 in 2019). Ramesses I is the 23rd most popular nobleman (up from 25th in 2019), the 27th most popular biography from Egypt (up from 32nd in 2019) and the most popular Egyptian Nobleman.

Page views of Ramesses IS by language

Among noblemen, Ramesses I ranks 23 out of 843. Before him are Grand Duchess Anastasia Nikolaevna of Russia, Harold Harefoot, Philippe I, Duke of Orléans, El Cid, Anne of Austria, and William the Conqueror. After him are Eleanor of Aquitaine, Albert, Prince Consort, Rudolf, Crown Prince of Austria, Edward VII, Grand Duchess Olga Nikolaevna of Russia, and Charles the Bold.