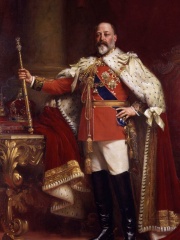 Edward VII (Albert Edward; 9 November 1841 – 6 May 1910) was King of the United Kingdom of Great Britain and Ireland and Emperor of India from 22 January 1901 until his death in 1910. The eldest son of Queen Victoria and Prince Albert of Saxe-Coburg and Gotha, Edward was related to royalty throughout Europe. He was Prince of Wales and heir apparent to the British throne for almost 60 years. Read more on Wikipedia

Since 2007, the English Wikipedia page of Edward VII has received more than 20,632,279 page views. His biography is available in 84 different languages on Wikipedia making him the 32nd most popular nobleman.

Among noblemen, Edward VII ranks 36 out of 559. Before him are Marie de' Medici, Diana, Princess of Wales, Princess Beatrice of the United Kingdom, Louis Antoine, Duke of Angoulême, Philippe I, Duke of Orléans, and Pope Leo IX. After him are Otto von Habsburg, Ramesses III, Albert, Prince Consort, Queen Sofía of Spain, Alexei Nikolaevich, Tsarevich of Russia, and Charles, Count of Valois.