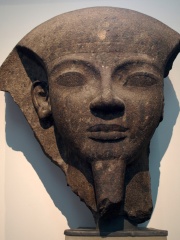 Ramesses VI Nebmaatre-Meryamun (sometimes written Ramses or Rameses, also known under his princely name of Amenherkhepshef C) was the fifth ruler of the Twentieth Dynasty of Egypt. He reigned for about eight years in the mid-to-late 12th century BC and was a son of Ramesses III and queen Iset Ta-Hemdjert. As a prince, he was known as Ramesses Amunherkhepeshef and held the titles of royal scribe and cavalry general. Read more on Wikipedia

Ramesses VI is most famous for being the pharaoh of the 20th dynasty of Egypt. He was the son of Ramesses V and the father of Ramesses VII.

Among noblemen, Ramesses VI ranks 109 out of 843. Before him are Élisabeth of France, Joanna I of Naples, Roger I of Sicily, Maximilian I, Elector of Bavaria, Henri, Grand Duke of Luxembourg, and Sophia of Hanover. After him are Joan of France, Duchess of Berry, Grand Duchess Olga Alexandrovna of Russia, Albert II, Prince of Monaco, Albert, Duke of Prussia, Mariana of Austria, and Fatma Sultan.