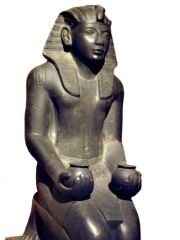 Heqamaatre Setepenamun Ramesses IV (also written Ramses or Rameses) was the third pharaoh of the Twentieth Dynasty of the New Kingdom of Ancient Egypt. He was the second son of Ramesses III and crown prince when his elder brother Amenherkhepshef died aged 15 in 1164 BC, when Ramesses was only 12 years old. His promotion to crown prince: is suggested by his appearance (suitably entitled) in a scene of the festival of Min at the Ramesses III temple at Karnak, which may have been completed by Year 22 [of his father's reign]. Read more on Wikipedia

Among noblemen, Ramesses IV ranks 81 out of 843. Before him are Lucien Bonaparte, Maria Alexandrovna, Ramesses XI, Gaius Caesar, Princess Alice of the United Kingdom, and Pepin of Landen. After him are Philippe of Belgium, Cleopatra of Macedon, Maria Josepha of Saxony, Dauphine of France, Dmitry Donskoy, Princess Victoria of Saxe-Coburg-Saalfeld, and Amadeus VIII, Duke of Savoy.