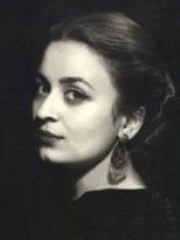 Sharifa Dina bint Abdul-Hamid (Arabic: دينا بنت عبد الحميد; 15 December 1929 – 21 August 2019) was a Hashemite princess and the Queen of Jordan from 1955 until 1957 as the first wife of King Hussein. She was the mother to Hussein's oldest child, Princess Alia bint Hussein. She and the king were married from 1955 to 1957, and in 1970 she married a high-ranking official in the PLO. Read more on Wikipedia

Among noblemen, Dina bint Abdul-Hamid ranks 509 out of 842. Before her are Isabella, Countess of Vertus, Magdalene of Bavaria, Princess Louise of Hesse-Darmstadt, Gaston, Prince of Viana, Princess Magdalena Augusta of Anhalt-Zerbst, and Rudolf I, Duke of Saxe-Wittenberg. After her are Konrad von Thüringen, Simonida, Demetrius Zvonimir of Croatia, Prince Georg Friedrich of Waldeck, Grand Duke Michael Mikhailovich of Russia, and Guidobaldo II della Rovere, Duke of Urbino.