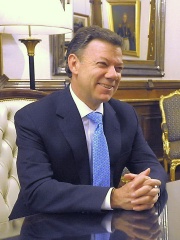 Juan Manuel Santos Calderón (Spanish: [ˈxwan maˈnwel ˈsantos kaldeˈɾon]; born 10 August 1951) is a Colombian politician who was the President of Colombia from 2010 to 2018. He was the sole recipient of the 2016 Nobel Peace Prize. An economist by profession and a journalist by trade, Santos is a member of the wealthy and influential Santos family, who from 1913 to 2007 were the majority shareholders of El Tiempo until its sale to Planeta DeAgostini in 2007. Read more on Wikipedia

Juan Manuel Santos is the president of Colombia. He is most famous for negotiating with the FARC rebels to end the civil war in Colombia.

Among politicians, Juan Manuel Santos ranks 2,320 out of 15,577. Before him are Johannes Rau, Birger Jarl, Ahmose-Nefertari, Kamehameha I, Canute Lavard, and Juraj Jánošík. After him are Yoweri Museveni, August Bebel, Louis I, Duke of Anjou, Abgar V, Maximinus II, and Theudebert I.