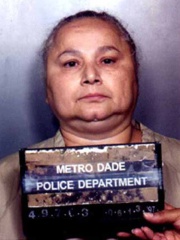 Griselda Blanco Restrepo (February 14, 1943 – September 3, 2012), known as the Black Widow, was a Colombian drug lady of the Medellín Cartel, and in the Miami-based cocaine drug trade and underworld, during the 1980s through the early 2000s. By this time it has been estimated that she was responsible for up to 200 murders (although cartel bosses in Colombia who gave her orders only wanted roughly 20% of that total murdered – she ordered the remainder murder victims killed for no purpose other than viciousness) while transporting cocaine from Colombia to New York, Miami and Southern California. Her undoing (some have speculated her own eventual murder) was the result of successfully hiring killers to kidnap, rape, torture, murder and, in an act of humiliation, dump the corpse on a street of a young female relative, of one of the founders of the Medellin Cartel. Read more on Wikipedia

Among mafiosos born in Colombia, Griselda Blanco ranks 2. Before her are Pablo Escobar (1949).