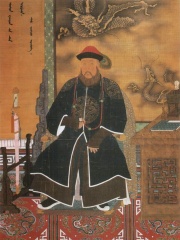 Dorgon (Manchu: ᡩᠣᡵᡤᠣᠨ, Möllendorff: dorgon, lit. 'badger'; 17 November 1612 – 31 December 1650), was a Manchu prince and regent of the early Qing dynasty. Born in the House of Aisin-Gioro as the 14th son of Nurhaci (the founder of the Later Jin dynasty, predecessor of the Qing dynasty), Dorgon started his career in military campaigns against the Ming dynasty, Mongols and Koreans during the reign of his eighth brother, Hong Taiji, who succeeded their father. After Hong Taiji's death in 1643, he was involved in a power struggle against Hong Taiji's eldest son, Hooge, over the succession to the throne. Read more on Wikipedia

Dorgon was a Manchu prince who became the first emperor of the Qing dynasty in China.

Page views of Dorgons by language

Among politicians, Dorgon ranks 1,781 out of 15,577. Before him are Charles Emmanuel I, Duke of Savoy, Urraca of León, Bảo Đại, Agathocles of Syracuse, Hor-Aha, and John Sigismund, Elector of Brandenburg. After him are Ammar ibn Yasir, Carloman of Bavaria, Otto Strasser, Prince Maximilian of Baden, Gordian I, and Louis the Child.