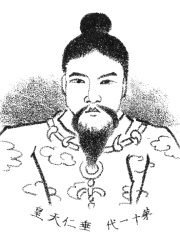 Emperor Suinin (垂仁天皇, Suinin-tennō), also known as Ikumeiribikoisachi no Sumeramikoto (活目入彦五十狭茅天皇) was the 11th legendary Emperor of Japan, according to the traditional order of succession. Less is known about Suinin than his father, and likewise he is also considered to be a "legendary emperor". Both the Kojiki, and the Nihon Shoki (collectively known as the Kiki) record events that took place during Suinin's alleged lifetime. Read more on Wikipedia

Suinin is most famous for being the first emperor of Japan.

Among people born in 69 BC, Emperor Suinin ranks 4. Before him are Cleopatra, Octavia the Younger, and Hyeokgeose of Silla. After him is Cornelius Gallus. Among people deceased in 70, Emperor Suinin ranks 4. Before him are Andrew the Apostle, Jude the Apostle, and Columella. After him are Simon bar Giora and Yohanan ben Zakkai.

Others Born in 69 BC