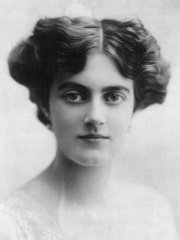 Clementine Ogilvy Spencer-Churchill, Baroness Spencer-Churchill, (née Hozier; 1 April 1885 – 12 December 1977) was the wife of Winston Churchill, Prime Minister of the United Kingdom, and a life peer in her own right. While legally the daughter of Sir Henry Hozier, her mother’s known infidelity and his suspected infertility make her paternal parentage uncertain. She met Winston Churchill in 1904 and they began their marriage of 56 years in 1908. Read more on Wikipedia

Since 2007, the English Wikipedia page of Clementine Churchill has received more than 3,199,792 page views. Her biography is available in 24 different languages on Wikipedia making her the 6,067th most popular politician.

Among politicians, Clementine Churchill ranks 6,030 out of 14,801. Before her are Michel Barnier, Rexhep Meidani, Dongcheon of Goguryeo, Shintaro Ishihara, Geoffrey II, Count of Anjou, and Sinatruces of Parthia. After her are Isabella of Savoy, Tokugawa Ietsugu, Manishtushu, Tokugawa Ienari, Princess Margarita of Greece and Denmark, and Philippe Villiers de L'Isle-Adam.