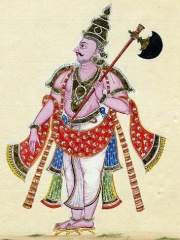 Parashurama (Sanskrit: परशुराम, romanized: Paraśurāma, lit. 'Rama with an axe'), also referred to as Rama Jamadagnya, Rama Bhargava and Veerarama, is the sixth incarnation among the Dashavatara of the god Vishnu in Hinduism. He is believed to be one of the Chiranjeevis (long-lived ones or immortal ones), who will appear at the end of the Kali yuga to be the guru of Vishnu's tenth and last incarnation, Kalki. Read more on Wikipedia

Parashurama is most famous for his battle with Kartavirya Arjuna, a king of the Haihaya dynasty. Parashurama was the son of sage Jamadagni and his wife Renuka. He is believed to have lived in the 11th century BC.

Page views of Parashuramas by language

Among politicians, Parashurama ranks 2,865 out of 15,710. Before him are Albrecht von Roon, Tokugawa Hidetada, Jeong Dojeon, Kuniaki Koiso, George Boleyn, 2nd Viscount Rochford, and Gotthard Kettler. After him are Agnes of Merania, John I of Aragon, Wilhelm Cuno, Eric IV of Denmark, Princess Astrid, Mrs. Ferner, and John George III, Elector of Saxony.