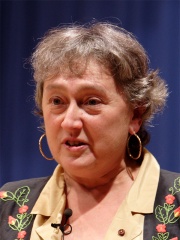 Lynn Margulis (born Lynn Petra Alexander; March 5, 1938 – November 22, 2011) was an American evolutionary theorist, biologist, science author, educator, and science popularizer, and was the primary modern proponent for the significance of symbiosis in evolution. Historian Jan Sapp has said that "Lynn Margulis's name is as synonymous with symbiosis as Charles Darwin's is with evolution." In particular, Margulis transformed and fundamentally framed current understanding of the evolution of cells with nuclei – an event Ernst Mayr called "perhaps the most important and dramatic event in the history of life" – by proposing it to have been the result of symbiotic mergers of bacteria. Read more on Wikipedia

Since 2007, the English Wikipedia page of Lynn Margulis has received more than 698,648 page views. Her biography is available in 40 different languages on Wikipedia making her the 89th most popular biologist.