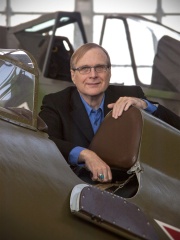 Paul Gardner Allen (January 21, 1953 – October 15, 2018) was an American business magnate, investor, and philanthropist. He was best known for co-founding Microsoft Corporation with childhood friend Bill Gates in 1975, which helped spark the microcomputer revolution of the 1970s and 1980s, later making Microsoft the world's largest personal computer software company. Allen was ranked as the 44th-wealthiest person in the world by Forbes in 2018, with an estimated net worth of $20.3 billion at the time of his death.Allen left active operations at Microsoft in early 1983 after a Hodgkin lymphoma diagnosis, remaining on its board as vice chairman. Read more on Wikipedia

Since 2007, the English Wikipedia page of Paul Allen has received more than 7,450,592 page views. His biography is available in 69 different languages on Wikipedia making him the 66th most popular businessperson.