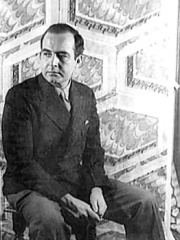 Samuel Osmond Barber II (March 9, 1910 – January 23, 1981) was an American composer, pianist, conductor, baritone, and music educator, and one of the most celebrated composers of the 20th century. The music critic Donal Henahan said, "Probably no other American composer has ever enjoyed such early, such persistent and such long-lasting acclaim." Principally influenced by nine years' composition studies with Rosario Scalero at the Curtis Institute and more than 25 years' study with his uncle, the composer Sidney Homer, Barber's music usually eschewed the experimental trends of musical modernism in favor of traditional 19th-century harmonic language and formal structure embracing lyricism and emotional expression. Read more on Wikipedia

Samuel Barber is most famous for composing the "Adagio for Strings" in 1936.