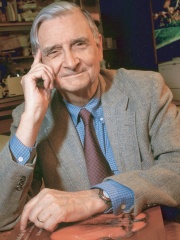 Edward Osborne Wilson (June 10, 1929 – December 26, 2021) was an American biologist, naturalist, and writer. According to David Attenborough, Wilson was the world's leading expert in his specialty of myrmecology, the study of ants. He was nicknamed the "ant man".Wilson has been called "the father of sociobiology" and "the father of biodiversity" for his environmental advocacy, and his secular-humanist and deist ideas pertaining to religious and ethical matters. Among his contributions to ecological theory is the theory of island biogeography (developed in collaboration with the mathematical ecologist Robert MacArthur), which served as the foundation of the field of conservation area design, as well as the unified neutral theory of biodiversity of Stephen P. Read more on Wikipedia

E. O. Wilson is most famous for his theory of sociobiology, which is the application of evolutionary theory to the study of animal and human social behavior.